Built under the guidance of the Victorian architect George Gilbert Scott (and a leader of the Victorian Gothic revival) using a variety of Somerset stones, including Hamstone, Bath stone, and sandstone from Bishops Lydeard.  Most of the church retains its original design with a few later amendments. St John’s church was consecrated on 13 April 1863.

The significance of St John’s has been recognised by English Heritage, who have regraded St John’s with a Grade I listed building status, one of national importance in the country’s heritage.

The town’s first glimpse of the church is the distinctive sandstone spire, and being the only church in the Taunton town centre with a spire, which stands on the south side of the chancel, and is of a sophisticated design with bands of different coloured stone and statues under pyramidical canopies in each corner.

The Church Bells and Their Casting

The four oldest bells now in the tower were cast in 1608 by George Purdue in Taunton. The treble was cast by the Mears and Stainbank, the Whitechapel Bell Foundry, in London and inscribed, to mark the Silver Jubilee of King George Vth in 1935. 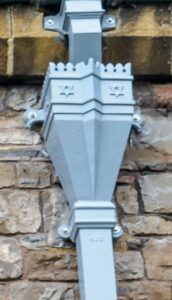 There are a number of these pipes and hoppers on the church roof elevations.

Cast Iron Gutter
The cast iron gutter (probably not original) is a larger capacity moulded pattern and as with the rainwater pipes, finished in a battleship grey paint.

Since 1893 Tuscan Foundry have been making cast products for the repair of period and traditional buildings and has been supplying cast iron gutter, pipe and drainage systems for church and ecclesiastical projects in Somerset, the South West and throughout the UK for many years.