Care and Maintenance of Rainwater Systems for Churches and Ecclesiastical Buildings

“Rainwater Systems” is a term covering a variety of different means of shedding rainwater away from a building. Most commonly seen on older church buildings as attached cast iron guttering, rainwater systems can also be incorporated and unseen, into the building’s fabric, behind parapets and within walls.

It has long been recognized that rainwater must be shed away from a building. Medieval churches were famed for their decorative gargoyles and impressive spouts, simple yet effective ways of doing the job. However, in a modern setting, these means of draining a roof would be rather hazardous and churches and ecclesiastical buildings are more commonly seen with guttering, hoppers, and downpipes.

For urban churches, once the water reaches the ground level it will normally be taken away from the church by a series of gullies and pipework leading to the storm drains. Churches in rural settings are more likely to have their downpipes connecting or directing water to soakaways.

Cast Iron Gutters and Pipes – Part of the Churches Architecture 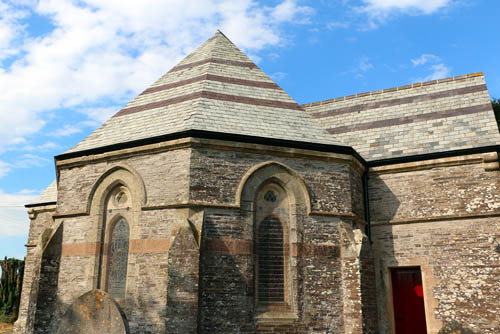 Rainwater systems are often detailed in part of the church’s architecture. In the case of many church buildings being listed or of significant historical interest, they form part of the protected fixtures and fittings.

Rainwater goods were also a favourite place to record dates, which are frequently seen cast into hoppers and leader heads found on the cast iron downpipes.

Most forms of deterioration that affect old buildings in the United Kingdom are attributable to the presence of excessive moisture. Dampness promotes timber decay, the corrosion of metals, and even structural collapse. It mobilises soluble salts that harm masonry and increases frost damage. The damp fabric also reduces thermal efficiency. Dampness inside buildings spoils plasterwork, decorations, and furniture, and creates conditions that are uncomfortable or harmful to the health of occupants.

If the water is not effectively channeled away from the building at ground level moisture will build up in the ground immediately surrounding the church. The build-up of ground-level water can cause movement in the ground (heave), causing cracks in walls and distortions in doorways and windows. Water can also be drawn up the wall from the foundations (rising damp), causing damage to internal plasterwork.

Water is the main agent of decay in historic buildings, including many churches. Blocked, cracked, or badly designed rainwater goods can allow water into the walls and roof timbers of a church building. The resulting dampness encourages timber decay through fungal attacks and insect infestation. In the winter months, water can penetrate the surface of masonry and freeze, causing stonework to crumble.

Climate change bringing increased rainfall may already be affecting older church buildings, which may have been fitted with a variety of different rainwater disposal systems during their life. It should not be assumed that the existing system is necessarily up to the job or appropriate for the particular type of building.

If a Church or Building is Listed

A building is listed when it is of special architectural or historic interest in a national context. Listed buildings have extra legal protection within the planning system.

In a listed church the rainwater goods will be considered part of the listed structure, although this need not be an insurmountable obstacle to their replacement if they are inadequate or inappropriate for the building.

Both lead and traditional cast iron guttering were chosen for their durability as well as beauty, and when maintained can last 100+ years, but this does not make it hard to work with. As with any other situation, prevention is better than cure, and establishing a regular maintenance routine will provide the most effective way of ensuring longevity. 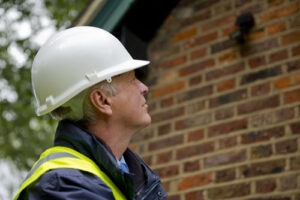 Rainwater goods should be surveyed and checked as part of a regular building inspection in all churches. The survey recommendations should be followed up promptly if a major fault is noted with the rainwater disposal system. However, as previously discussed not all types of rainwater goods may be accessible during the inspection, so it will mean accessing these more discreet and harder-to-access areas should also be included at regular intervals, as well.

During the summer (drier) months the beginnings of problems might not be obvious to the surveyor and yet may cause a lot of expensive damage before the next inspection is due.

We would advise inspecting and clearing gutters and pipes at least twice a year, with Autumn, after leaf fall being the most important.

What Prevents Church Gutters and Pipes from Working Effectively

Water running from the roof is not all gutters and pipes have to deal with. In autumn, leaves can block gutters within days, and because of their openness and use by the community, stray balls, beer cans, and plastic bags, along with dead birds or mammals.

Due to the age of most church buildings, its elements can also cause failure problems, including fragments of tile, slate, and fallen stonework that can build up. Plants can establish themselves in the gutter after a build-up of silt.

Cast Iron gutters and downpipes can corrode and crack, allowing water to escape and enter the building. Damage can also occur to guttering when ladders are leaned against them and downpipes are vulnerable to vandalism. Older lead and iron pipes may have inadequate joints between pipes where water can seep out.

Below surface drains are often of the Victorian ceramic type and can be susceptible to damage by ground movement, heavy vehicles or tree roots. If the surface water drains become blocked the system can back up, causing problems further up the system.

Detecting Signs of Problems in the Rainwater System

Lead, copper, and cast iron drainpipes are all potential targets for thieves. When replacing stolen metalwork it is assumed that the replacement will be like-for-like, but action to discourage theft in the future must take place.

It is expected that repairs to rainwater goods will be carried out like-for-like; that is that the design and materials of the existing system will be adhered to in any repairs. This is especially important for listed churches.

Particular issues are encountered when repairing or replacing lead and cast iron gutters and downpipes. The cost of lead and cast iron rainwater systems can be high. Depending on the overall condition of the system (which should be assessed by a qualified surveyor or specialist) Removal and repair or replacement of certain parts could be an option.  Other options involve the full replacement of one complete elevation.

At Tuscan Foundry we can offer bespoke cast iron gutters and pipes to exactly match the original, or where costs are prohibitive offer a match from one of our 48 profiles that would be closest to the original.

Tuscan Foundry has supplied cast iron rainwater systems for churches throughout the UK and can offer technical advice on all aspects of church cast iron repair and restoration.